Our loved Silvio has left us! 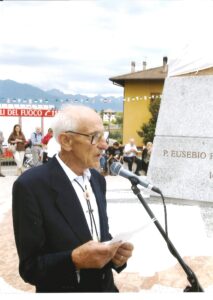 Last night, our loved Silvio Chini, honorary president of the Cultural Association Father Eusebio F. Chini, passed away at the age of 92. He died peacefully and went to join Franca, his loved wife who has missed him so much in the last three years.

Silvio was a formidable promoter of the figure of Father Eusebio Chini, he dedicated his life to Padre Kino and left us a tangible example of his restless work.

His unceasing work began in the 80s of the last century with the constitution of the “Comitato Chiniano” (Chinian Committee), set up in Segno to further spread the work and the figure of our great missionary and explorer Father Eusebio Chini and to broaden the knowledge of his missionary work in his native land and throughout Trentino.

Since then, he has worked incessantly for many years with such zeal as to infect all those who collaborated with him. In 1992 the Committee was then transformed into the current Father Eusebio F. Chini Cultural Association.

Under his guidance many works have been carried out: the equestrian monument donated by the city of Tucson in Arizona which was placed in the Piazza of Segno in 1991, the building of the current Padre Kino Cultural Centre, purchased and renovated and eventually unveiled in 1998. Inside it hosts the Chinian museum, set up with the patient and constant search for objects, instruments of that period and works of art on display. The museum has then become a place where you can breathe the air of Father Kino time, retrace his travels, his explorations, the help and protection given to his Indians, feel his soul and relive his ideals. The topicality of Padre Kino emerges with the testimonies of love and gratitude through the works on display, fruit of the work of many artists and authors from, from the lands where father has worked.

All this work was always done by Silvio with naturalness, passion and dedication such as to animate and involve all his collaborators who have followed one another over the time. As a matter of fact, he led the Association as President until 2009 and then has always accompanied it with his advice as Honorary President.

He strongly wanted the statue of Padre Kino placed at the entrance of Segno created by the artists Livio and Giorgio Conta, to pay tribute also to the overseas friends that have erected so many monuments in proximity of very busy roads and communication routes.

Together with the inauguration of the monument, the twinning of the Municipality of Taio (now Predaia) with Magdalena de Kino (Sonora – Mexico) where the remains of Padre Kino rest in the mausoleum that the city dedicated to him, and of whom also took its name. This was signed in 2008

Silvio led us on several tours to Arizona and Sonora, the places where Padre Kino worked, establishing relationships of mutual respect and friendship that continue to this day. His way of approaching people has always been simple and spontaneous, he carried out his work with constancy and determination until he reached the goals he had set. All those who knew him remember him with gratitude and love.

Today we greet him and thank him for all he has done, to mention the example and encouragement he has given us so far with his words and which he will always give us with the concrete testimonies he has left us.

One of his great wishes was to see Father Kino Beato (blessed), he was able to see him as Venerable last July and we will do everything, with prayer and example of life, to make this desire of his, which is also ours, become true.

Thank you, Silvio, we all greet you and now that you have reached your loved ones and Father Eusebio in heaven, help us from up there.