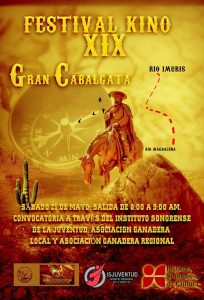 The Cabalgata of Father Kino, inserted in the program of events to celebrate the 50th anniversary of the discovery of the remains of Father Kino, this year saw the participation of about two thousand horsemen.

The start of the parade, Saturday, May 19 from Imuris, has taken place after the blessing of the riders and horses that was imparted on the banks of the Bambuto river, after which has begun with the aim of evoking the rides mentioned in the travel equestrian missionaries of the Missionary and the foundation of more than three hundred years before the city. The ride ended in Magdalena de Kino after a distance of 18 Km.

One way to remember the Italian Jesuit worthy of its reputation of “Father on horseback”, a term coined by Professor Herbert Eugene Bolton, who discovered the first and greatest scholar then of Father Kino

The Path of the Cabalgata
https://www.google.com/maps/d/u/0/viewer?mid=1Wbk72tkDOQbMquDhBHmxwZULlDA&hl=es

The footage of the Cabalgata
https://www.facebook.com/AyuntamientoDeMagdalena/videos/1131025113626220/

Father Kino and wheat history, by the THE KINO HERITAGE SOCIETY

Padre Kino and the Art