The Monument to Padre Kino in Segno 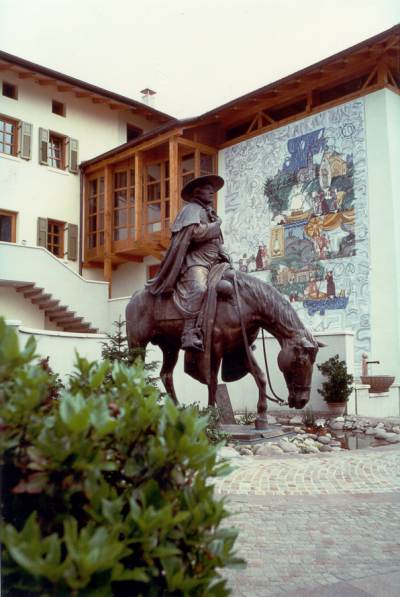 In 1987, great public celebrations were held to honour the three hundredth anniversary of the arrival of Padre Kino in the lands of Pimería Alta: In addition to these meetings, a project was devised to erect “Three Statues for Three Centuries.” A committee of citizens in Tucson, Arizona, sponsored by the Arizona Historical Society, commissioned the renowned Mexican artist, Julián Martínez, who had represented Kino in many other situations, to design and cast three monumental, equestrian statues. They were to be cast with the idea to place one in Tucson, where Kino founded the beautiful mission of San Xavier del Bac; in Magdalena de Kino to honour the place of his burial; and in Segno to honour his birthplace. Then, on June 16, 1991, in Segno, before authorities of the United States, and of the states of Arizona, Sonora, and the Region of Trentino, the third statue was unveiled.
The monument in Segno represents Padre Kino on a steed, tired after a long crossing of the desert. At his side hangs an astrolabe, the inseparable instrument of the astronomer and cartographer; he holds in his hand an abalone shell, one of a kind of blue shells that are found on the shores of the Pacific Ocean. As a gift from the Indian peoples, they inspired him to discover and prove the peninsularity of California. Having admired them years before in Baja California, he was astonished to see them again in the Northern Pimería. Kino’s serene and visionary expression reveals a character determined to accomplish his goal of service to the peoples of northwest New Spain, to open new vistas of prosperity. The considerable bronze monument weighs 4.5 tons; it stands 4.5 meters high, 3.7 meters long and 1.8 meters wide. At the statue’s base an inscription in bronze depicts and summarize the life of the great Tyrolese Jesuit