The Museum of Segno

The Museum Of Segno, A Museum For Padre Kino

While it is true that Padre Kino left the Old World to find a home in the New, his old home has never forgotten the Padre on Horseback. Just months before the equestrian statue of Kino arrived in Segno, the village of his birth acquired an appropriate place to erect the larger than life bronze statue. An old and respected family in the village had made their home available for purchase so that a group of Segnians could buy the building with the aim of preserving the site for the eventual arrival of the statue. It quickly became a project of mutual hope and expectation. The municipality of Taio entered into an agreement with the new owners so that a permanent site for the statue and a museum would be located on the piazza. It was only a matter of months before the huge bronze statue made its final trip from Mexico through the winding streets of Segno
Once the statue was dedicated in place in 1991, work began in earnest to create a museum immediately behind the monument on the piazza. This effort would take much time, much planning, and a great deal of money. For five more years elements of the museum and outside décor were contemplated. Finally in 1996 the elegant mosaic on the outside of the building was finished. It was the distinguished work of Mariano Fracalossi.. Once again, the fame of Eusebio Kino was drawing artists and craftsmen into his web of creativity. By 1997 the notion of the museum was taking hold. The statue and the mosaic invited a broader response, so the Association of Padre Eusebio Chini determined on a museum design that would be drafted by architects. The exhibits are thoroughly explained and gracefully distributed throughout the three-story museum.
The entry hall is dominated by a one-meter bronze replica of the Silvercruys statue that stands in the Capitol of the United States. Framed maps and pictures lead to the stairway to the first floor where an auditorium awaits the visitor.The auditorium wall is covered with a brilliant mural that depicts Kino’s missionary life in Sonora and Arizona. Nereo de la Peña, a native of Caborca, Sonora, painted the murales.
From the auditorium a ramp leads to the second floor exhibit hall where glass cases display a 17th century astrolabe acquired in 1996 in Granada, Spain. The same case also holds a 17th century Galileo style telescope that was acquired in Florence; it is shown together with a 17th century compass.
The Museum of Padre Kino is a marvel in the way it encapsulates the story of missionary zeal, scientific exploration, and commitment to the transformation of native culture to the sophisticated ways of European civilization. This is not a monument to conquest, but a staunch statement about the social evolution of man toward a better, if more complex, world.
Padre Eusebio not only brought the fruits of his Jesuit education to the New World, but he brought the strength of human endeavor he learned so richly from his home in the Tyrol. (Charles W. Polzer)

The Murales of Segno

The six murales displayed at the Museum dedicated to Padre Kino in Segno were painted on cement panels by Nereo De La Peña a Mexican muralist from Caborca who painted them in Rivera-esque style (from the Mexican artist Diego de Rivera) .
Everyone of the six panels which are lined up one by the other with enormous artistic effect represent six different moments of the life of Padre Kino in Pimería Alta. from the life of the natives before the Spanish through their progress. Other interesting murales are displayed inside the museum. 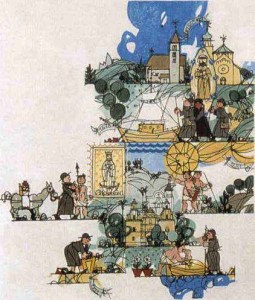 The Mosaic of Mariano Fracalossi

Draft of the Italian artist Mariano Fracalossi from Trent. It shows the different steps of the human vicissitude of Padre Kino from his birth (the church of Torra), the sailing to the New World, his happy encounter with the Indians, the crossing of the Colorado river up to his death and burial in Magdalena. The mausoleum missing on the sketch, will be added later on during the laying of the mosaic on request of the Kino committee. The mosaic is placed on he wall outside the museum