The three statues are work of the Mexican sculptor Julián Martínez and were cast on request of a group of citizens in Tucson who formed a committee to head a project called “Three Statues for Three Centuries.” This time the sensitive portrayal of Kino on horseback would be cast in bronze for three places – Tucson, Arizona – U.S.A., mission territory of Padre Kino, Magdalena, Sonora – Mexico site of his death and burial and Segno, Trentino – Italia, his birth village tocelebrate the 300th anniversary of the arrival of Padre Kino in Pimería. 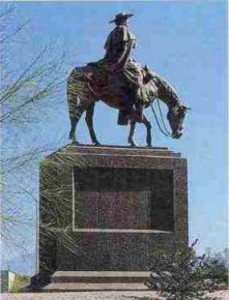 The funds necessary to complete the three statues came from the city of Tucson, from Pima County and from several generous benefactors and also from Julián Martínez who accepted a very modest sum for all three castings! It was as though Kino’s historic generosity were being repaid in kind. The first of the three statues arrived in Tucson in May, 1988, and the statue was erected on the newly completed Kino 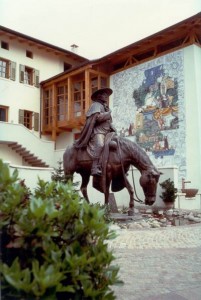 Parkway. The second statue was completed a year later and erected in Magdalena on the toll road to Hermosillo! The third statue was completed in 1990 and shipped by freighter to Genoa, from which port the Province of Trent hauled it to the tiny town of Segno where the statue was dedicated in a jubilant celebration in June, 1991